Can't figure out the make and model of your laptop? Don't worry, you're not alone.

We've been asked that very question thousands of times and realized it's not quite as easy as it could be! We decided we'd make a handy tutorial for everyone to figure out exactly what laptop they have regardless of the reason. You may be looking to purchase replacement parts, look up specifications, drivers or (hopefully) to sell your laptop to us. We've taken the guesswork out of the process and think you'll enjoy how easy it is to identify what kind of computer you actually have.

Are we missing something or you still can't figure out what laptop model you've got? Let us know!

For an Acer laptop you'll find the tag on the bottom of your laptop (shown in the red box) when the screen is closed. From there you'll look for a box that should have the "Acer" logo in it. Typical Acer model examples are Acer Aspire 5517, Acer Aspire D257 and Acer Travelmate 3000 Series. 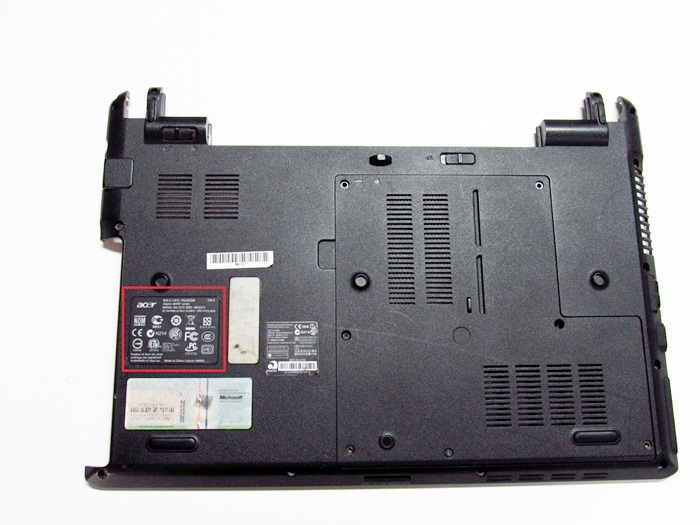 Below is a zoomed in photo of the Acer's bottom cover that was in red. This particular model is an Acer Aspire 4810T, the Aspire line is their most common. 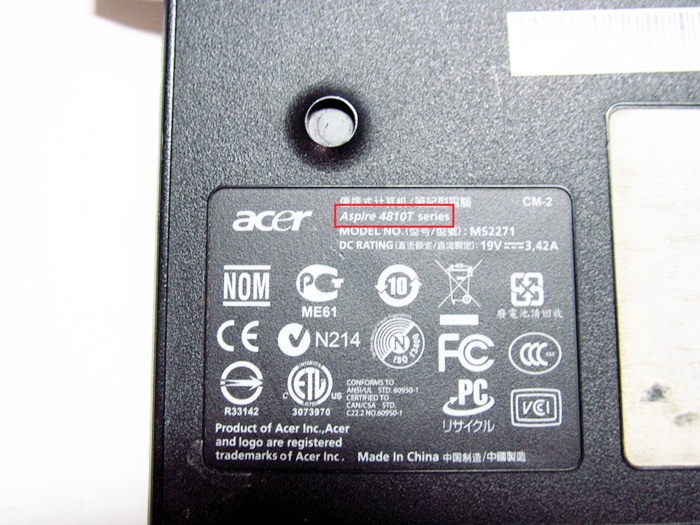 Apple model numbers are the trickiest of them all. Apple Macbook, Macbook Pro, and Macbook Air luckily all use the same system. You'll find it on the bottom case, when the screen is closed look at the writing where the screen and hinges meet as shown in red. 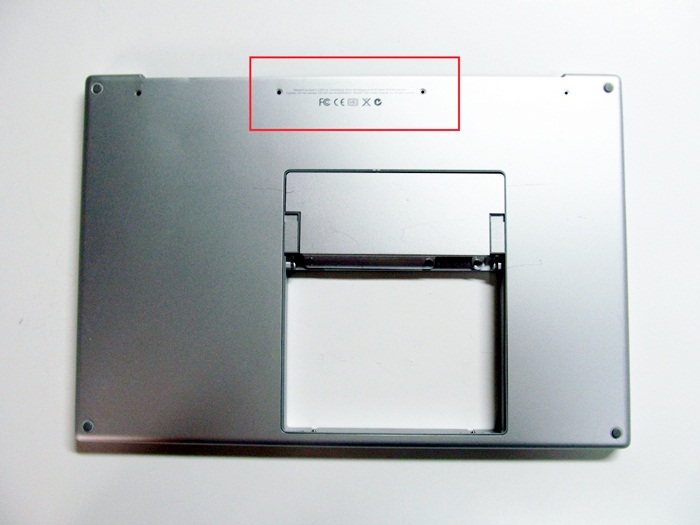 There will always be the letter "A" before the model number. For example a few of their more popular models are an A1278, A1286 and an A1181. Here is a zoomed in photo showing the location in red. 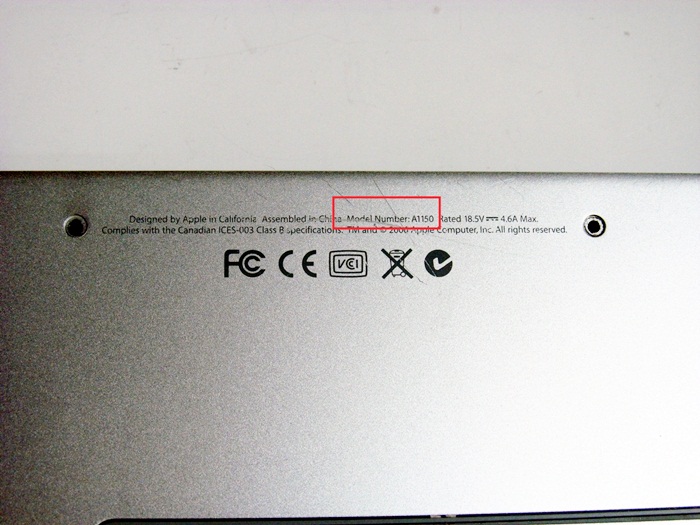 If this is worn off or you can't find it there is another way Apple uses to identify their models. You'll need to turn the laptop on and go to "About This Mac" which can be found in the Apple start menu. Depending on what version of OSX you're using you will either see the Serial Number on the first page it opens or you'll need to click "More Info...". From here you'll select "Hardware Overview:" you'll then see the Serial Number which can then be looked up on Apple's website. For example this models serial number was W8921PTC66D. Click here to use Apple's Serial Number Look up.

Below is an Asus they're like most where the model number is on the bottom of the case. It should be near where the Asus name is on the laptop as shown in the red box. 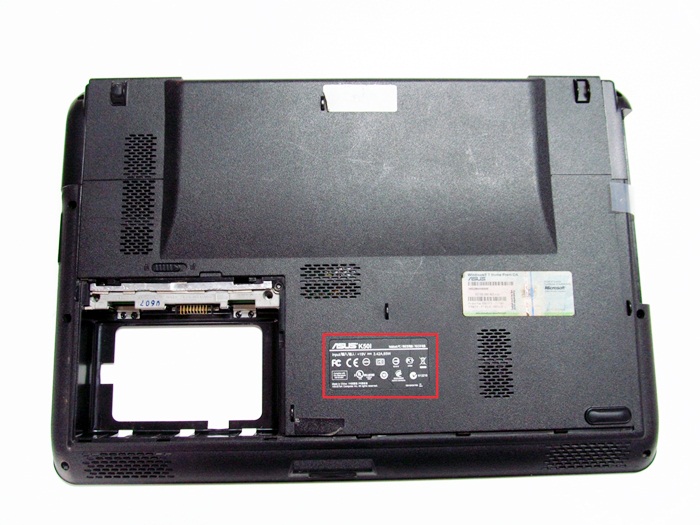 If you look closely at it you'll see the model number written right next to where Asus is, this model happens to be a K50 series. Asus typically uses a letter and then number but their newer models are becoming more complex, for example: X500CA or G571 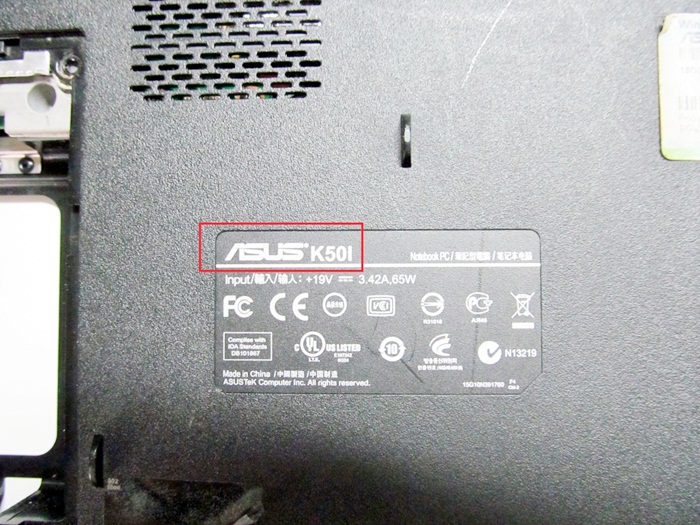 Compaq was owned by HP so the look and positioning of their model number is going to be almost identical. They are typically only different by the starting letter so pay careful attention. Compaq usually puts the model number in two places, first with the screen open look around the bezel that borders the screen. You'll typically see it there, for example: CQ50 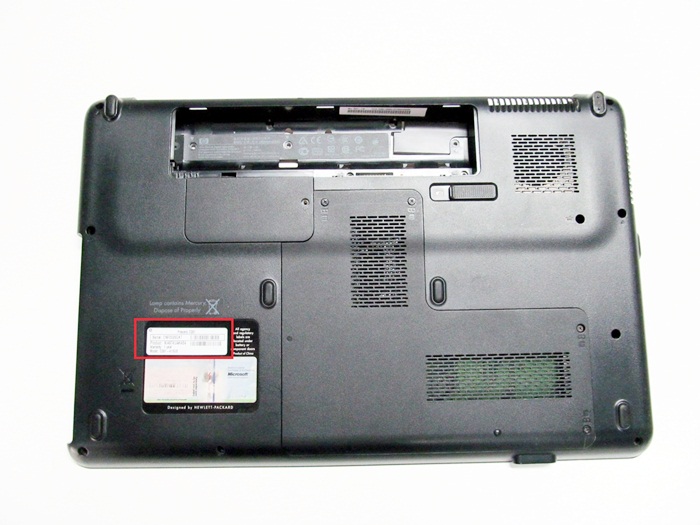 They also have a tag on the bottom of the computer, this picture shows the area in red. 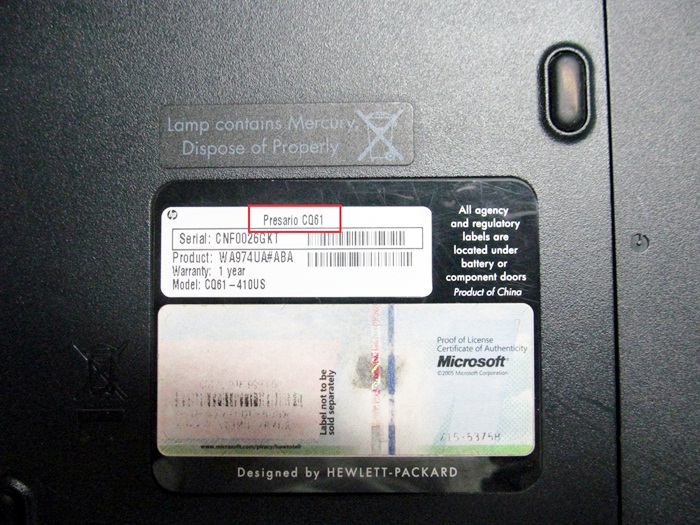 For most newer Dell laptops starting around 2005 to current they have it above the keyboard somewhere as shown in the red box. Some of the newer Dell models will have a similar tag to the other manufacturers on the bottom of the computer. Examples would be: Inspiron 5137 or Latitude E6420 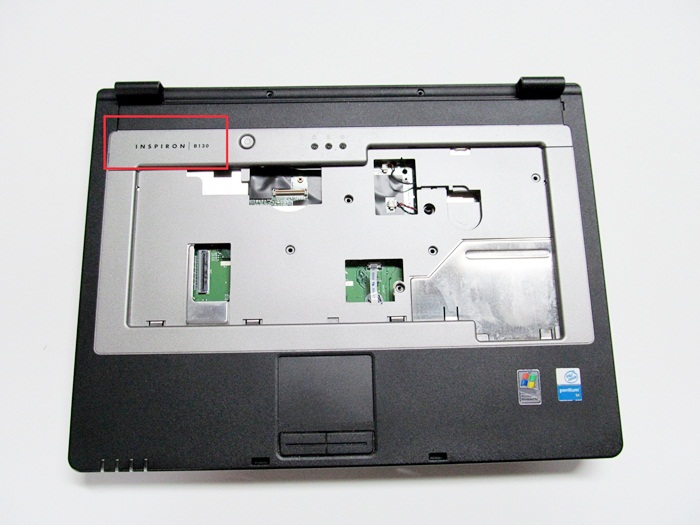 You'll notice the recurring theme by now, Gateway is the same with their model number being listed on the bottom of the laptop with the screen closed. Here we show it in red below. 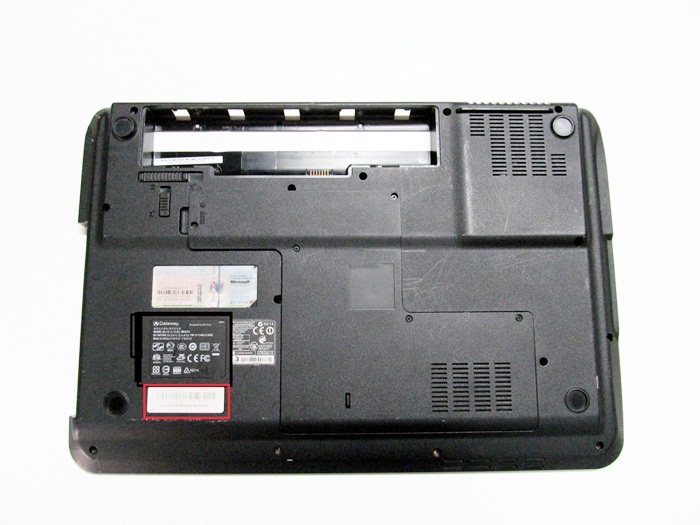 You're almost always looking for the Gateway logo first as the model number will be very close to it. Gateway's more popular models will have the letters "NV" first as most of their models are similar to NV55 or NV72. They do have newer and older models however the identification is the same. 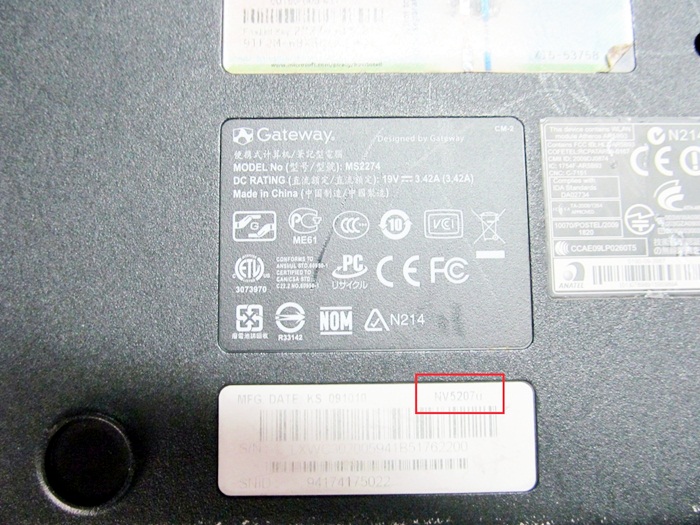 As mentioned earlier in the Compaq section, HP is the parent company to Compaq so their model numbers and locations are going to be very similar. An HP DV6000 is indeed different than a Compaq V6000. As with Compaq the model number will be on the bottom of the computer or around the screen's plastic or metal bezel. 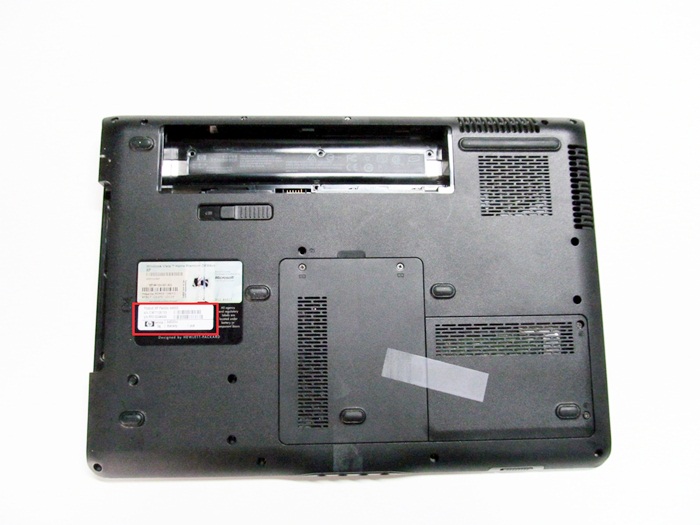 Here is a zoomed view of the HP laptop's bottom case showing where it can be located. Like most brands it's best to look for the manufacturer logo, in this case the HP Logo is just below the Product/Model number. 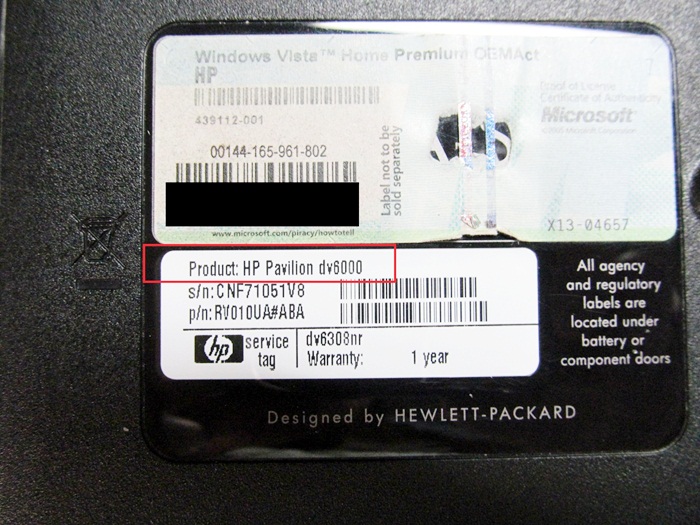 This is one of the trickier models to find, If you follow how all the other brands are you'll look on the bottom case and find what you assume to be your Sony model number. This however is NOT the model number we're looking for or that part stores use. If you find something like "Sony PCG-7122L" do NOT use this model number. For all Sony models until 2013 and up it will be around the edge of the screen on the casing like HP and Compaq. It is typically in the bottom right corner of the screen bezel but can also be in the top right or left. It can be quite small and blend into the laptop but it is always there. 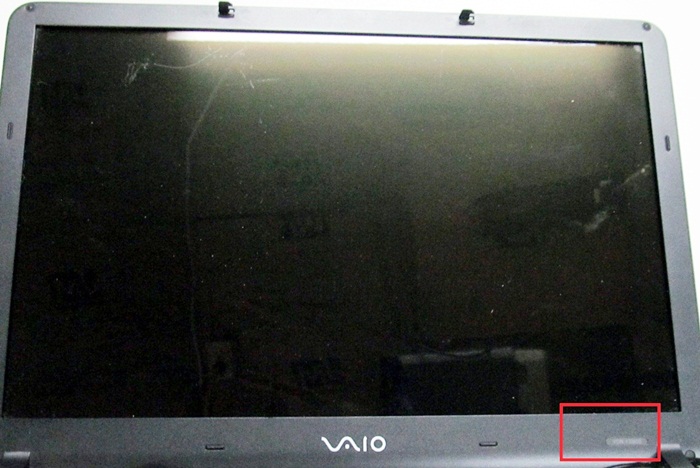 Here is a closer view of the model number found in the bottom right corner of the bezel around the Sony LCD screen. 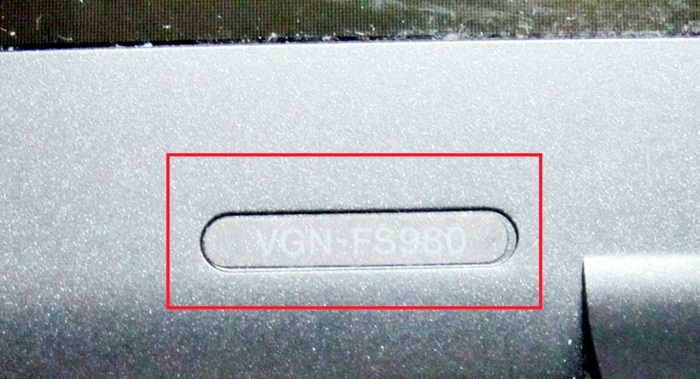 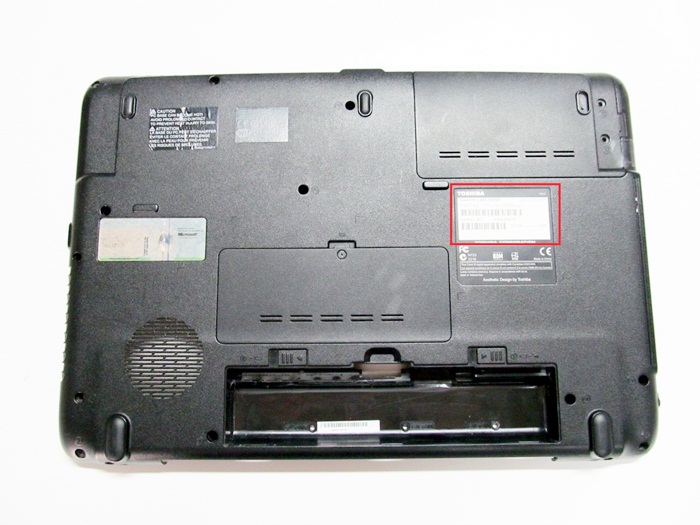 You're going to be looking for a long model number that is a combination of letters and numbers. Their most popular models are the Satellite series however some of their older models used a different name like Tecra. Now you need to look for the number after Satellite, for example L455-S5009 or L875-S4505. The only part you'll need for a quote is the first letter and numbers. It could even be shorter like C55 or P75 but the first grouping is all you will need as seen in red below. 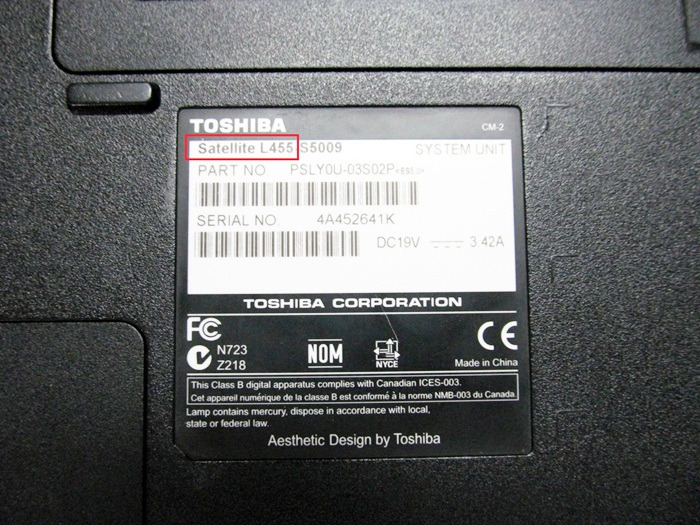 If this didn't answer your questions or help you identify your laptop please let us know, we enjoy adding to the tutorial as it has helped thousands of people like yourself. Keep in mind there are some manufacturers not included like eMachines or Nobilis which are quite uncommon and out of business. However when in doubt we'd recommend starting with the bottom case, looking for the company logo and it shouldn't be far. Thanks for reading, we'd love to hear your feedback, simply contact us here.