How to: Easily identify and upgrade your laptop memory (RAM) 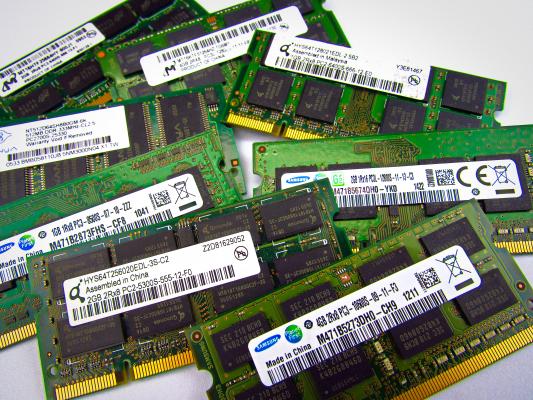 Tired of dealing with an aging machine and want to bring it a bit more up to date? A memory upgrade can breathe new life into an old laptop but what kind of memory should you buy? Where should you buy it? How in the world do you install it? Can you really do it yourself? Don't worry, if you've figured out how to turn your computer on and find this tutorial you'll have no problem with this simple DIY project. All you'll need is a few short minutes and a small Phillips screwdriver. First let's cover what memory is and why you want more. RAM is an acronym for "random access memory", which in its simplest form is the memory your computer has available to it to run programs and can be considered its "working memory". The more a computer has, the more it can "work" on at any given time. There are much more technical ways to explain it, but lets just go with this - the more you have the better. In today's world you don't want to be running anything less than 2gb of memory, even that is pushing it.

Ok so I want more, I'll just buy as much as I can afford and solve all of my problems!

Wrong. Every laptop's motherboard has a limit of memory it can support, and in a general sense you can assume that the older your computer, the less it can handle. So, how can you tell which version your computer uses? You can try to make sense of it via the many websites looking to sell memory to the average consumer, they will use terms like "DDR, DDR2, DDR3" as well as "200 or 204 pin". While this is valuable information it is of no importance to you. The only bit of information you need to know is printed right on the memory already inside your laptop. Online guides and laptop upgrade sites can and will be wrong from time to time, in mere moments you can be positive you're ordering the right memory for your machine. You'll simply open the memory compartment of your laptop, depending on the computer it can range from extremely easy to a bit of a task. Start by shutting your computer down, removing the charger and battery. Flip the computer over and look at the bottom, most modern laptops have a few cover doors on the bottom that can be opened with a simple phillips screwdriver to reveal the memory. Spread the retainers apart and out pops your old memory.

I've removed it, now what??

Take a look at the stickers on the memory, you'll be reading a bunch of information you don't need to know or understand, there is one thing we're looking for; the speed. A list of common speeds from oldest to newest is: 2700s, 3200s, 4200s, 5300s, 6400s, 8500s, 10600s, 12800s. There will be plenty of info before and after those numbers, a standard number might read "DDR3 PC3-12800s", you're just looking for the 12800s. Armed with that information you're now ready to order. You can simply go to eBay (you won't find cheaper memory anywhere else) and search for "12800s memory" (the "s" designates it is for a laptop and NOT a desktop). Don't pay too much attention to the brand; Samsung, Hynix, ADATA, Kingston, Elpida, Micron, Nanya, Ramaxel and others come pre-installed in millions of laptops every year. You're likely looking at one of these brands from your current computer as we speak.

How much can I install? What about price?

Now keep in mind as you're searching there are limits on how much your specific computer can handle as well as what size modules are available for the speed of memory you need. With the above speeds ranging from 5300s to 12800s it can be very common to find inexpensive 4 and 8gb modules for 12800s memory, however for 5300s you will pay a pretty penny for a 4gb module and we've yet to see an 8gb 5300s module (that was huge back when 5300s memory was the norm). The sizes and prices will range and we've included a chart of what to expect for common sizes, if you're paying much more you are likely shopping at the wrong place. Most of the affordable memory you see will be used, which simply means it was removed from another laptop that either failed or was upgraded. Don't worry, used memory is an excellent way to upgrade, we sell many thousands of modules each year and it is extremely rare we receive a bad module as a return. 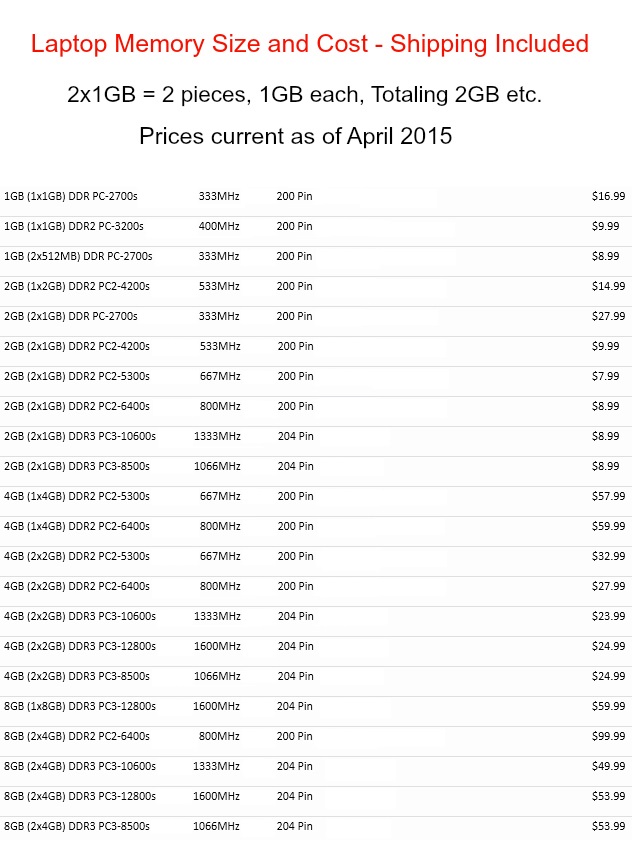 So, how much should you buy?

You should start by using our handy page to identify your laptop model and figure out the exact computer you're working with. Once you know what you have we would suggest searching for "maximum memory for (insert your model here)"". Often times you'll find the answer quickly. If you are having a hard time it is typically (no not always) a safe bet that you can double the memory your computer came with. If you bought a machine that has 2gb you're likely safe to assume it can run with 4gb etc. If you've installed the new memory and the laptop won't boot, you've likely installed too much memory (more than the motherboards limit), simply remove one of the modules and try again. Odds are you'll be just fine, the computer will turn on and your upgrade is complete. Many times the computer will display a message confirming that the system memory has changed, this is completely normal.

32 bit operating systems were the norm for many years, for the purpose of this tutorial the only thing this means is that no matter how much memory you install in your 32 bit machine it will only be able to physically use 4gb total. So lets say you put 16gb into a machine running Windows 7 32 bit, it would literally use 4gb and disregard" the rest due to its limitations. Take that same computer and reinstall Windows with a 64 bit version (the modern and standard version of most OS's) and your computer would immediately begin utilizing the full 16gb. Is there a limit to a 64 bit OS? Theoretically yes, but we're guessing you don't plan on installing 16,800,000,000 gigabytes in your laptop anytime soon.

We hope you've found our tutorial useful on how to identify, purchase and upgrade your laptops memory, if you have any questions please let us know in the comments below!